Neurocysticercosis is a common condition managed by neurologists. Intra-ventriclar cysticercal cysts require to be excised surgically. These patients present with raised intracranial features as headache, vomitting, blurring of vision due to obstructive hydrocephalus. This patient had a cyst in the fourth ventricle causing obstructive hydrocephalus. Conventional surgery would require a suboccipital craniotomy , cortisectomy of the vermis and excision of the cyst. With advances in endoscopes, this was excised using transventricular route with endoscope.
Pre-operative planning was done using neuronavigation. Two trajectories were marked -- one for third ventriculostomy and the other trajectory was through the frontal horn of lateral ventricle, along the foramen of Monroe, the aqueduct into the fourth ventricle. Burrhole was made between these two trajectories. Endoscope with working channel was inserted into the frontal horn, third ventriculostomy was done. Following this, the endoscope was redirected towards the posterior third ventricle. The aqueduct was dilated allowing for easy passage of the endoscope into the fourth ventricle through the aqueduct. The cyst was seen in the fourth ventricle. This was caught with a forcep and retrieved alongwith the endoscope in toto.
Patient had an uneventful recovery and at follow-up, her imaging was suggestive of resolved hydrocephalus.
Aids used: Endoscope, Neuro-navigation 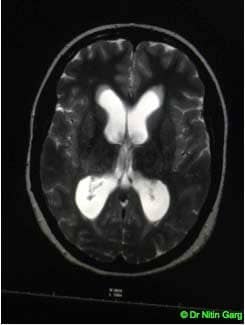 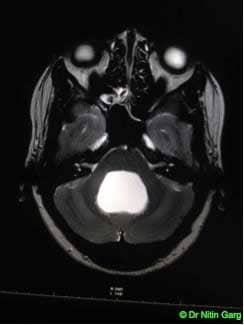 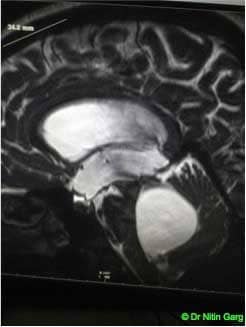 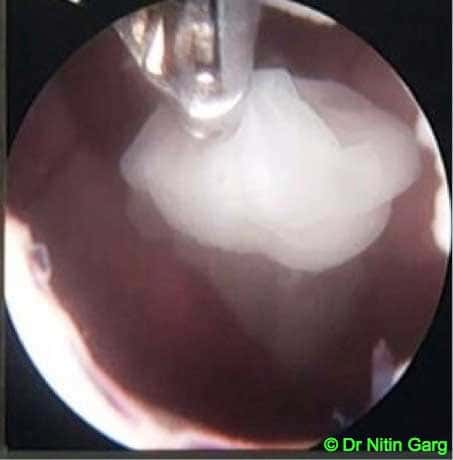 Intra-op image-- cysticercal cyst caught by the forceps and being withdrawn. 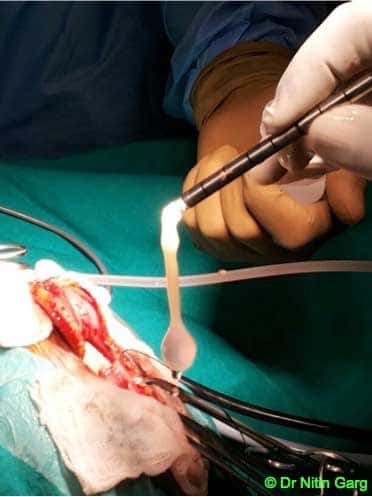 Cyst after being retrieved in-toto alongwith the endoscope 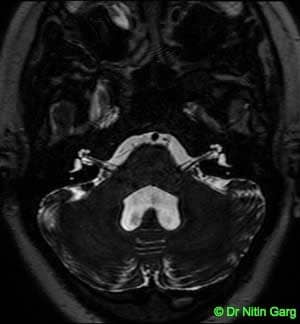